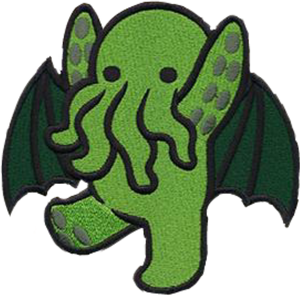 Fubar's name is Louis Geintz [sometimes Luis, sometimes Gentz]. Before his "H.P. Lovecraft moment" his codename was Brainteaser.[1] He lives in a tank in the basement of Hawthorne, and is one of the Psychic Arts instructors,[2][3] as well as one of the faculty advisors for the Dream Team,[4] and helps Mrs. Cantrel with the duties of House Mother to Hawthorne Cottage. He does not appear to be on campus in Gen 2[5]

He's provided psychic counseling to Phase[6], Eldritch[7], Miranda Nichole Mahren[8], and Tansy Walcutt[9]. He's also been tasked to maintain mental contact with Tansy in case something goes wrong with Kayda's walk on the dark side.[10]

He's instrumental in helping Imp adjust to Whateley after she is hired as an art teacher and keeps her from succumbing to T. Rex's attempts to get her to quit and/or fired.

The most extreme case of GSD on record ever to survive.[2] He is a twelve foot long cross of insect, mollusk, and squid. He has an uncanny resemblance to dread Cthulhu. Reputedly, this change was caused by an encounter with a very dangerous entity.

Fubar has gills and cannot live out of water. He lives in a tank underneath Hawthorne, and has for the past twenty years. He needs ultra-pure water; the filters on his tank have to be changed regularly. If they aren't, he creates an amazing amount of mucus; cleaning his filters (and getting slimed in the process) is one of the standard punishments for students who are given detention in Hawthorne.[2]

He uses a mental construct (sometimes described as an astral construct or other terms) to communicate with people.[2] His range is far enough to reach Berlin, where he maintains a small office.[3] His appearance is whatever he wants it to be. Which is handy at Faction Three meetings.[3]

Fubar's reputed to be the most powerful psychic on the planet. He may or may not be limited to the normal descriptions of a PDP. He seems to have learned a considerable amount of magic somewhere along the way, although clearly he can't use rituals, or symbols. Perhaps not surprisingly, he doesn't see any real distinction between PSI and magic.

He's also super-intelligent, and has a Grandmaster's chess rating of 2799 (just below perfect).[6]

He's not perfect. Jimmy T's psychic null gives him a major headache, worse than trying to penetrate Mule's defenses.[11] Otherwise, his major limit is that he can only be in one place at a time.