Whateley Academy Wiki
Register
Don't have an account?
Sign In
Advertisement
in: Class of 2011, Avatar, Exemplar,
and 6 more

Scald-Crow, a.k.a Gráinne Róisín Ní Ceallacháin, née Padraig O'Callaghan, is an Avatar hosting "The Morrigan"[1], but who is usually referred to as "Morgan" by Gráinne.[2]

Gráinne is a member of Whateley Academy Class of 2011 who resides in Room 236 of Poe Cottage.[3] She was born in Bellingham, but grew up on Lummi Island, in Washington State.[1]

She's turning into a Faerie due to the influence of her spirit being one.[4]

"Your face otherwise is normal looking if a bit androgynous." - Sloan, her sister.[2]

Her mutation has given her sharper, strong, "claw-like" toe and fingernails.[1] 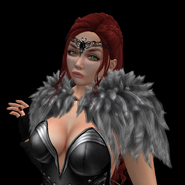 Image of Scald-Crow made in Second Life by RoseBunny. Received via Discord. 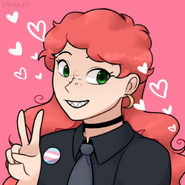