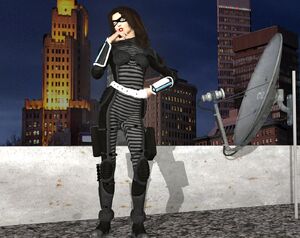 Tabitha Turner, code name Tabby Cat, is a member of STAR League. She was born Thomas Allen in 1971 in Providence, R.I.[1] She's an m2f changeling and resided in Poe; she was a member of the Masterminds. Her husband is Falcon and her daughter is Wallflower.[2][3][4]

She curved in all the right places and she could be sexy just sitting and reading a book.[2]

Mom was just that way; mercurial temper with an equally volatile change of mood. She could be roaring mad one moment then lucid and rational with a speed that was disconcerting to say the least. In my home life, Dad had always been the stable one the even keel that kept the ship of our family on course.[3]

Tabby would be a dangerous cat burglar if she hadn't meet her future husband at Whateley. She spent a large portion of her years there with both the Masterminds and a chip on her shoulder over her "lot in life." Falcon didn't give up on her, however and managed to keep his girlfriend out of any kind of serious trouble. The two were married almost immediately after college.[1]

She's an EX-3 and probability warper (WA-2 luck), but also an Energizer 2, able to enhance her strength, reflexes and flexibility.[5] She appears to have graduated the same year as Falcon, 1986, but just "barely graduated".[6]

Retrieved from "https://crystalhall.fandom.com/wiki/Tabby_Cat?oldid=40479"
Community content is available under CC-BY-SA unless otherwise noted.